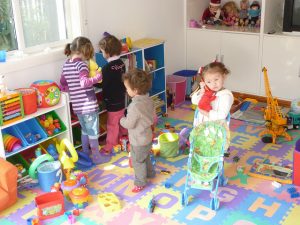 “Oh my gosh, I don’t even know what that is for!” – me looking at another new baby device/toy/thing. I’m beginning to feel a bit like an alien. Like I landed in a world of all this baby STUFF and I am the only being who feels that none of it looks familiar or makes sense. It was my first foray into a baby store 4 years ago this month. I was 35 and about 7 months pregnant. Having had little (no) experience with infants, I had to register for my baby shower. Oh. My.

I am very glad I don’t have an infant now, almost 4 years later, because there is even more of it. Baby gear, as it is referred to by stores. Okay, I admit I am an older mom AND old-fashioned when it came to having a child. I didn’t know all of the new ways, or new rules, and we just kind of went with what worked. As a result we did not end up with as much of the stuff. Don’t get me wrong, the living room still resembled a small daycare. A swing that she wouldn’t swing in. A door jumper she used 3 times in a year. Then there were the favorite toys: the baby gate and the living room table. She pulled up on them and chewed on them. The rock-n-play that allowed the rest of the family to have dinners (sometimes) together during those first several infant months. The high chair it felt like she LIVED in since it took her so long to eat. I was so lucky to get a lot of things at my baby shower and learned from others and from books how to do things.

But my goodness, the STUFF. What do you do with it all, and do you too wish you didn’t have so much? My child is almost 4 and I’m constantly weeding out things that we can give away, sell, donate. Some little kid items are so cool, like color wonder markers, learning games, and her little magnetic drawing board for the car. That magnetic board had gotten weekly car use for almost 3 years now. Some are not so cool, like the overabundance of stuffed animals crammed into every crevice in her room. Because if I get rid of one, SHE KNOWS. For a mom who tends toward minimalism in terms of having items in my home, the “stuff” has been a struggle. Do we really need all this stuff? Well, some of it yes, most of it no, and all of it gets used at one time or another!

Is it possible to do parenting of an infant without all the stuff? Would you want to? And what were your go-to necessities?