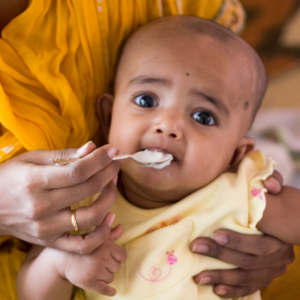 I hear it asked a lot: is rice cereal necessary as a first food? Will it help my child sleep through the night? Can I mix it in the nighttime bottle of breastmilk or formula for a better night’s sleep? The answer I most often see is “we’ve tried it and it didn’t work” or “maybe, sometimes.”

Here is the ugly truth: our child did not sleep through the night until she was a YEAR AND A HALF old. Why? Hunger. She hovered around 5% on the weight percentile at that time so when she was hungry, at 2:30 every morning, we fed her. Milk or a banana. Some say rice cereal makes children fuller and sleep longer. We tried it in the bottle, feeding it more, and just feeding it at night a couple of times and it made no difference. From 6 months to 18 months she woke hungry at 2:30am. We could have done CIO. We did it for sleep training. I had no problem with letting her learn to fall asleep on her own in her crib at 9 months. But I could not bring myself to let her cry in hunger.

Aside from using rice cereal to try to get a child to sleep better, is it a good first food? There is nutrition in the fortified cereal. It has iron, and the amount of iron in breast milk is insufficient alone for a baby from 6-12 months of age. Iron supplements are useful and sometimes recommended by doctors to breastfeeding mothers as well. And it’s not just iron. The cereal has a lot of necessary vitamins for baby’s growth and development.

Some argue that the same nutrients added to rice cereal can be found in natural foods, such as leafy greens, fruits, meat, and oatmeal. There are pros and cons too numerous to name them all, and everyone seems to be either on one side or the other of this particular fence. However, it seems that some must be choosing the third alternative: Both. When it comes down to it, it may simply be a matter of choice. What do YOU feel is the best for your child?

Having no experience with small children or feeding a child, I chose to puree fruits, vegetables, and meat and feed it to our 8-12 month old. From 4-8 months she only tasted foods or ate one type of food per day for practice. Later it was oatmeal for breakfast, puree for lunch, and puree for dinner. The puree was typically a mix of fruit and meat such as apple chicken, or a mix of a veggie and fruit like carrot apple. At that time a close family member talked to me several times about the importance of feeding her rice cereal, and I did do this a few times per week. I remember she would buy a new box and bring it over, and since I was too tired to argue and she would continue buying the cereal, I threw away boxes regularly and pretended I was feeding them to her more. Our daughter ate most of the purees as well as the cereal, we learned early she disliked sweet potatoes and corn, and she continued steadily on the growth curve.

Many issues in life are broken down into pros and cons; we tend to see the black and white of the problem when in reality there are good and bad in most things. The pros to rice cereal is that it has good things in it that babies need to grow and develop. The cons include possible arsenic levels and not being sufficient to meet all dietary needs on its own. Babies can benefit from eating fresh fruits and vegetables as well as a fortified cereal. So my answer to the question Rice Cereal is: It is up to the parent(s) to make the choice. And perhaps to feel lucky to have so many good healthy options that make it so difficult to choose!