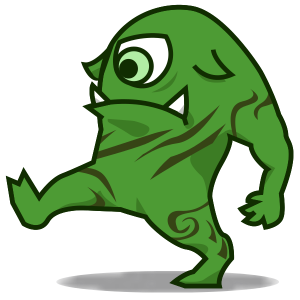 “I heard a monster in my closet!”

Recently my 3 year old refused to get out of bed in the morning, due to her intense fear that the monster in her closet would get her. When do children begin believing in monsters and hearing or seeing them in dark spaces in their rooms? Has the closet monster been around since we had closets? And where did they hide out before that??

On a serious note, I hear from a lot of moms that their kids go through a “monster fan” stage. They love to see cartoons about them, read books about them, play pretend monsters at home, ask questions about monsters, and generally display curiosity and intense interest in everything monster. Yet they fear them too. I often wonder, do we naturally create the idea of monsters as kids or does the interest stem from TV shows? In our experience it was the former.

There may even be an evolutionary basis to children’s fears. In our not so distant history, when we lived in caves or other open structures, children slept with parents or other adults for safety from wild animals and the elements. The instinct to feel a fear of dark places and the desire to sleep with parents seems instinctually appropriate, although not necessary for most children nowadays. Like the fight/flight response in all of us, it was an important automatic response and met a need.

So how do you deal with a child who fears the monsters under the bed? First, decide whether to 1) agree with their normal childhood delusion that monsters are real or 2) continue to reassure that monsters do not exist. I utilized the second choice before I finally gave up the fight I could not win, after about a year. We began reassuring our daughter that monsters were not allowed in our home and never had been, after a failed attempt with “monster spray” suggested by a friend. This can work well for kids, but not ours unfortunately, as she stated after smelling it, that it was “just water.” Recently she reminded me that “monsters aren’t allowed in our house mommy” during a discussion in which monsters came up again. Fighting the delusion that monsters exist does no good for most children, but giving them a way to feel safe, no matter what phrase, story, reassurance or mantra you use, provides them a way to deal with their monsters and feel less fearful.

For some ideas for managing monster fears, I included a couple links with some helpful points: